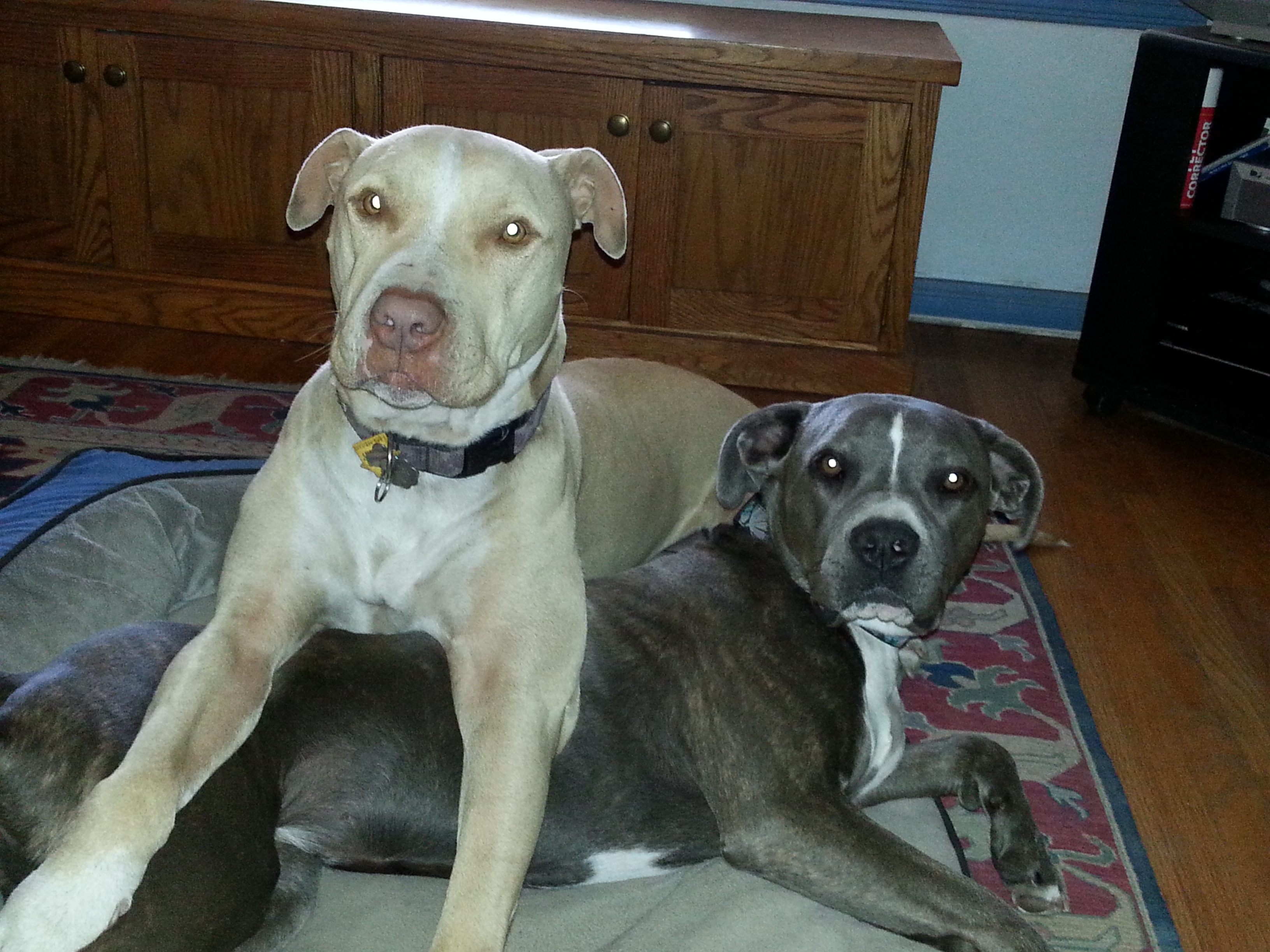 Andrea and I have two dogs. Ticket (the blond) is a four-year-old male pit bull who our friend Jess found running around the streets near USC three-plus years ago. Billie Jean is two, half Staffordshire terrier, a quarter boxer, an eighth bullmastiff. (Yes, we had her DNA tested. So sue us.) We got her from Dogtown Dog Rescue about a year ago.

As I was walking them along the south side of Veterans Park in Culver City today, I spied a woman playing with her boxer on the softball field. The dog was running around off leash, thirty, forty, fifty yards from her. Dogs aren’t allowed in Culver City parks, but that’s dumb, so if she got away with it, more power to her. But off leash? That’s another matter.

Since I spied the boxer, you can be damn sure Ticket and Billie Jean did too. T is beyond his crazy days, and just kind of eyed it. B can sometimes be a maniac when another dog’s around, so intent is she on getting to know it.

I knew what was coming. I was powerless to stop it.

Ticket still watched intently. But he was cool. Billie Jean was blessedly calm.

The boxer was about six feet away when the owner finally caught up with him and snapped his leash onto his collar. Then she looked at me and said, “He’s friendly.”

Which leads to my point. People who think that because their dogs are friendly they can let them do whatever they damn please. This dog did not come when she called it. This dog marked its territory. This dog, had I been on the other side of the street, would have run out into it.

I thought about telling her all the things she was doing wrong. Which was mostly letting a dog, especially a dog that does not come instantly when called, run around off leash. But I’ve learned you can’t get through to people like that. They think because their dog is “friendly” nothing bad will ever happen. Instead of considering a change, they’ll start in on “just because your dog isn’t trained” and screaming will ensue.

So I simply said, “They’re friendly too,” but I got no further, because she then said “When they’re in a pack like that …” and I said “Right” and moved on.

Because some dog owners just don’t get it. They won’t get it until something terrible happens. And maybe not even then.